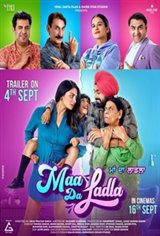 The story revolves around three main characters Gora, Sehaj, and Kevin. Gora is a struggling actor in the U.K. who lives on odd jobs. Sehaj is a single mother who lives with her son Kevin. She had kept any information from Kevin about his father, who had left her when she was pregnant.

Sehaj hires Gora to play Kevin's father and make him dislike him so that he doesn't feel he is missing a father and feels his world to be complete with just the mother. During the process, Gora and Sehaj clash over what is the right way to bring the kid up and eventually, learn about each other's struggles in life.

Now, will this reel family turn into a real family or not? Maa Da Ladla answers this in the most heartwarming way!