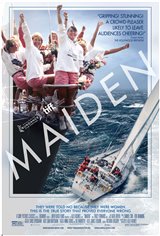 The incredible, against-all-odds story of sailor Tracy Edwards, 24, who skippered the first all-female international crew in the 1989 Whitbread Round the World Yacht Race.

In 1989, the concept of an all-female crew was inconceivable to the male-dominated world of open-ocean yacht racing. Members of the press were betting the women would fail. Sponsors balked, worrying that the crew might die in their attempt, which would bring bad publicity. Edwards refused to give up – she remortgaged her home and bought a secondhand boat that the crew refurbished themselves. She finally secured sponsorship through Jordan’s King Hussein.

By the time the crew and their Maiden yacht returned to the starting point in Southampton, England, after 32,000 miles of global racing, the sailing world and British nation were in shock. Edwards was given the 1990 Yachtsman of the Year Award, the first woman to
receive the accolade, and was named a Member of the British Empire.