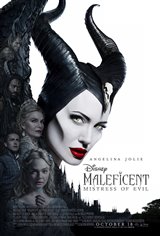 Princess Aurora (Elle Fanning) is living as the Queen of the Moors when her beloved, Prince Philip (Harris Dickinson), asks her to marry him. Maleficent (Angelina Jolie) is furious about the upcoming marriage, but in order to keep the peace, Philip's parents, King John (Robert Lindsay) and Queen Ingrith (Michelle Pfeiffer), hold an engagement dinner at their castle, with Aurora and Maleficent as the honored guests.

However, the dinner doesn't go as planned when Maleficent clashes with the scheming Queen Ingrith. Maleficent lashes out and casts a spell that leaves King John in a deep sleep. As Maleficent flees, she's hit by an iron bullet from Ingrith’s henchwoman. Rescued by dark fairies who have been cast off by humans and are therefore eager for revenge, Maleficent is in awe by the discovery of a race of her own kind and decides to join their quest.