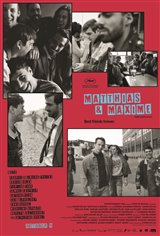 When Matthias (Gabriel D’Almeida Freitas) loses a bet, he has to act in a student film alongside his childhood friend, Maxime (Xavier Dolan). But budding director Erika (Camille Felton), who is the younger sister of their friend Rivette, doesn’t let him know that he’ll have to share a gay kiss with Maxime until the moment before the scene is to be filmed. Mathias does it, but afterwards, he’s plunged into deep anxiety and distances himself from Maxime.

Maxime, who has put his career on hold to look after his cruel, alcoholic mother, Manon (Anne Dorval), is about to leave for an year-long trip to Australia, but he first needs a letter of recommendation from Matthias’ father. While waiting for this important document, Maxime transfers guardianship of his mother to his aunt.