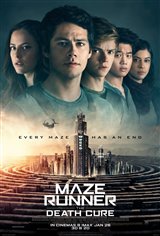 Thomas (Dylan O'Brien) and the other Gladers embark on a mission to put a stop to WCKD, which is sacrificing kids in order to find a cure to a deadly disease called The Flare, an infection which turns people into rampaging zombies. The Flare has wiped out most of the world's population.

Immune to the disease themselves, Thomas, Newt (Thomas Brodie-Sangster) and the rest of the Gladers decide they have to save the other captured kids by putting a stop to WCKD. However, Thomas has a hard time putting his feelings for Teresa (Kaya Scodelario) aside, even though she betrayed them. Friendships are tested and loyalties are strained as the fight for survival comes to a climax.

Based on the young adult novel trilogy by James Dashner.