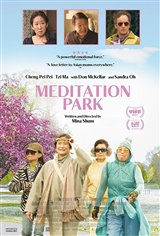 Maria Wang (Cheng Pei Pei), 60, reveres her workaholic accountant husband, Bing (Tzi Ma). For his 65th birthday, Maria is throwing him a big birthday party, and has invited their grown daughter Ava (Sandra Oh), but not their son Charles, because Bing has disowned him and she has respected his insistence that she also not speak to their son.

However, while preparing for the party, Maria is tidying up and finds an orange g-string thong in the pocket of Bing's jacket. Shocked, Maria begins to realize Bing may not be the perfect person she believes him to be. After 40 years of listening to and obeying Bing, Maria has no money of her own or any way to get a job. To get money to follow him around in order to find out the truth, she embarks on a journey of self-discovery by engaging with the world around her, something Bing has always discouraged, and finds a way to make a little cash.