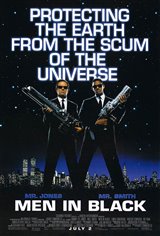 James Darrell Edwards III (Will Smith) is an average NYPD officer doing his routine job, but his life is about to change completely. A bizarre encounter with a pawnshop owner, who is an alien in disguise, exposes him to a race of extraterrestrial beings living on Earth and a secret organization dedicated to policing them, the Men in Black.

With his former identity erased, Agent J teams up with Agent K (Tommy Lee Jones) to investigate the latest string of extraterrestrial phenomena. When an alien terrorist has arrived on earth to capture two ambassadors from opposing galaxies, the agents must track them down before they destroy earth.