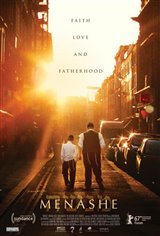 When his wife Leah dies, Menashe (Menashe Lustig) — a kind, hapless grocery store clerk — struggles. In his ultra-orthodox Hasidic Jewish community in New York, tradition prohibits a Hasidic child from being raised in a house without a mother, so Menashe is not allowed to raise his young son, Rieven (Ruben Niborski), alone. He has to leave Rieven in the care of his late wife's judgmental brother Eizik (Yoel Weisshaus) and his wife.

Heartbroken, Menashe tries to find a way to get Rieven back, including considering marriage, but having endured an arranged marriage before, he's not anxious to dive into another relationship without love.