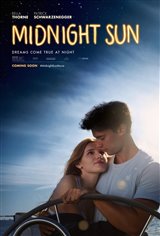 Katie Price (Bella Thorne), 17, has had a dangerous sensitivity to the sun since birth. The only time she can leave her house is at night, so she sleeps during the day and at night, is a busker who plays her guitar in the subway. When she meets Charlie (Patrick Schwarzenegger), she doesn't tell him about her condition at first, afraid it will scare him away.

When they finally go on a date one night, it goes really well up until the point when she has to run home as soon as the sun starts to come out. Charlie is filled with questions, but Katie is still afraid to tell him and starts to avoid him.

Based on the 2006 Japanese film of the same name, Taiyō no Uta.