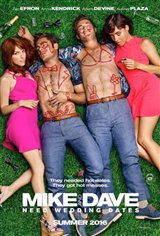 Hard-partying brothers Mike (Adam DeVine) and Dave (Zac Efron) are told by their father that they need to find suitable dates for their sister's upcoming Hawaiian wedding. In an effort to please their father and show their family that they can secure respectable dates, they place an ad online looking for a couple of nice women.

The ad reaches The Wendy Williams Show and Tatiana and Alice (Aubrey Plaza, Anna Kendrick) see it. The out-of-control girls decide to respond and trick the brothers into thinking they're polite and composed. But once the girls reach Hawaiian shores, the unsuspecting men realize they've been out-smarted, and will soon be out-partied.