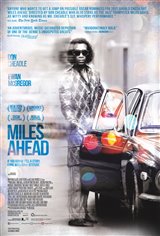 In the late 1970s, jazz superstar Miles Davis (Don Cheadle), during the height of his fame, disappears from public view. Holing up in his home alone, he endures chronic pain due to a deteriorating hip. The medication he takes to control the pain stifles his musical voice and causes hallucinations.

Music reporter Dave Braden (Ewan McGregor) wants to know what's going on and he somehow manages to get into Davis' house. The two men form a friendship and embark on an adventure to get back a tape of Davis' latest compositions, that was recently stolen.