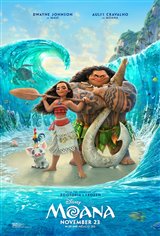 On a mystic island off Oceania in the South Pacific, young princess Moana Waialiki (voiced by Auli’i Cravalho) is the feisty teenage daughter of the chief of her tribe, and the only daughter in a long line of navigators. When her family needs her help, she sails off across the open Pacific ocean on an epic adventure to save her people.

Joined by the energetic, less-than-humble, once-powerful demigod Maui (voiced by Dwayne Johnson), Moana is determined to prove herself a master wayfinder and to fulfill her ancestors’ unfinished quest. Along the way, she discovers her own identity on the mission, which also pits her against impossible odds and enormous monsters.