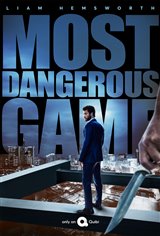 How far would you go to fight for your family? Dodge Tynes (Liam Hemsworth) has been diagnosed with a terminal illness and can’t afford treatment. Meanwhile, his wife is expecting a baby boy and Dodge wants to be there for the birth of his son.

Desperate for cash, he agrees to take part in a deadly game where he is hunted by several men out to kill him. If he comes out alive, Dodge will take home several million dollars.