Mummies: Secrets of the Pharaohs 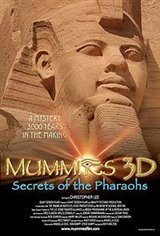 Mummies: Secrets of the Pharaohs follows researchers and explorers as they piece together the archeological and genetic clues of Egyptian mummies. These relics of the past create a window into the fascinating and mysterious world of the pharaohs. In addition to increasing our understanding of the culture, religion, medicine, and daily life thousands of years ago, scientists today are reconstructing mummy DNA and deciphering ancient texts to gain insight into modern human genetics and advance medical treatments. To unwrap the secrets of the pharaohs is to perhaps glimpse the future of our own civilization.