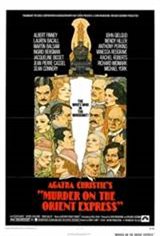 Like many of Agatha Christie's mysteries, Murder on the Orient Express is predicated on an actual event, in this case the Lindbergh kidnapping. In the movie, everyone on board the Orient Express seems to have concluded that hateful financier Ratchett (Richard Widmark) was behind the abduction and murder of the infant daughter of a famed aviatrix.

Thus, when Ratchett is himself found murdered, everyone is suspect. Normally, the police would handle the investigation, but the train has been stalled by a snowslide halfway between Istanbul and Paris.

Thus, it's up to the insufferable but brilliant Belgian detective Hercule Poirot (an unrecognizable Albert Finney) to activate his little grey cells and determine who's guilty.

Among the suspects are colorful characters played by Lauren Bacall, Martin Balsam, Jacqueline Bisset, Sean Connery, Wendy Hiller, John Gielgud, Anthony Perkins, Vanessa Redgrave, and Ingrid Bergman, whose performance won her a third Academy Award. (In her acceptance speech, Bergman apologized for her win, insisting that Day for Night's Valentina Cortese deserved the prize.) The first and best in a long line of contemporary Christie adaptations, the film scores on atmosphere, period detail, and richness of characterization.