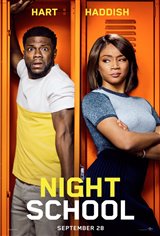 Teddy (Kevin Hart) is an inventive salesman, but when he blows up the BBQ City store where he works while proposing to his girlfriend, he's out of a job. In order to impress his fiancée, he tries to get a new job as a stockbroker, but is told he needs to graduate from high school first.

Teddy goes back to Piedmont High School, where he enrolls in night school in order to get his GED. His teacher is Carrie (Tiffany Haddish), who takes no nonsense from her students. Teddy complains about the work load and even though he swears to Kerry he's going to be able to handle it, he eventually finds it to be too much. He quits and gets a job wearing a chicken suit at a fast food outlet named Christian Chicken. Disappointed in him, Kerry tries to convince Teddy to come back to class.
Director:
Malcolm D. Lee
Studio:
Universal Pictures
Producer(s):
Kevin Hart, William Packer
Cast:
Kevin Hart, Tiffany Haddish, Rob Riggle, Romany Malco, Ben Schwartz, Taran Killam, Megalyn Echikunwoke, Mary Lynn Rajskub, Keith David, Fat Joe, Anne Winters, Al Madrigal
Writer(s):
Kevin Hart, Harry Ratchford, Joey Wells, Matthew Kellard
Official Site:
nightschoolmovie.com