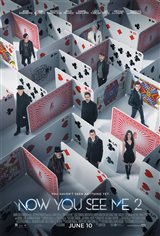 One year after outwitting the FBI and winning the public's adulation with their Robin Hood-style magic spectacles, The Four Horsemen (Jesse Eisenberg, Woody Harrelson, Dave Franco, Lizzy Caplan) resurface for a comeback performance.

Meanwhile, Thaddeus Bradley (Morgan Freeman), who wound up in jail due to the magicians, vows his revenge from his prison cell. During their sold-out performance in New York City, their show is hijacked and their boss, Dylan Rhodes (Mark Ruffalo) orders them to get off the stage. They exit the building and drop into a chute. When they arrive at the end of the chute, they're surprised to find they're in China.

It turns out that Bradley is working with unethical tech magnate Walter Mabry (Daniel Radcliffe), who demands that The Four Horsemen steal the key to every computer system on the planet.