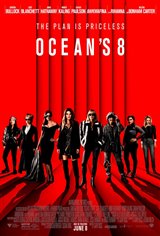 When Debbie Ocean (Sandra Bullock), sister of renowned thief Danny Ocean, is released from prison after a five-year stint, she immediately goes back to her old line of work. Having plotted out a jewel heist to take place at New York City’s yearly Met Gala, she's set her sights on a Cartier necklace worth $150 million. Along with her close friend and partner-in-crime, Lou (Cate Blanchett), Debbie assembles a team of skilled women to aid in the heist, promising each of them a paycheck of $16.5 million for their services.

First, they have to arrange that the Cartier necklace is worn to the Gala. Debbie decides that celebrity diva Daphne Kluger (Anne Hathaway) will be the perfect mark. They get a stylist (Helena Bonham Carter) to convince Daphne to wear the sparkling necklace, which comes with a team of security experts. With only a few weeks to put the plan in motion, the crew of veterans and newcomers have to get all their skills lined up in order to pull off their foolproof plan.