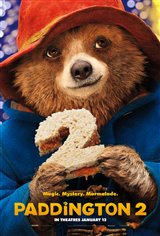 Paddington, a bear from Peru who now lives in London with the Brown family, is living a happy life. However, things go very wrong when a new neighbor's self-centeredness and criminal ways wind up with Paddington behind bars.

The films starts with Paddington wanting to get his Aunt Lucy (Imelda Staunton) in Peru a very special gift for her fast-approaching 100th birthday. He spots a rare, beautifully detailed pop-up book of London at the local antique shop and takes on a variety of odd jobs, including window washing and cutting hair in a barbershop, in order to earn enough money to buy the book and send it to her.

Unfortunately, Paddington’s new neighbor, has-been stage actor Phoenix Buchanan (Hugh Grant), also wants the book, because he believes if he has it in his possession, he can find a secret treasure. He steals the book, but frames Paddington, who is arrested and taken to prison, where he makes friends with the guards and his fellow inmates, because, as Henry says, "Paddington looks for the good in all of us, and somehow he finds it.”