Paws of Fury: The Legend of Hank 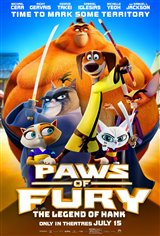 In this family-friendly animated adaptation of Mel Brook’s Blazing Saddles, down-on-his-luck dog Hank (Michael Cera) dreams of becoming a samurai. In pursuit of his dreams he journeys to Kakamucho, a village full of cats, to train with the famous samurai, Jimbo (Samuel L. Jackson), who reluctantly agrees to be his mentor.

However, with the threat of their city being wiped out by warmongering cat Ika Chu (Ricky Gervais) and the leader of his army Ohga (George Takei), Hank must hurry to prove himself worthy of the challenge and save the tiny cat town. Hank takes the role of the town samurai and with the help of newfound friends such as the village’s ruler Shogun (Mel Brooks), clumsy Chuck (Gabriel Iglesias), and optimistic Yuki (Michelle Yeoh), works to defend the town from total destruction.