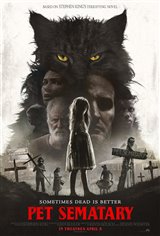 Dr. Louis Creed (Jason Clarke) and his wife Rachel (Amy Seimetz), along with their two young children, Ellie and Gage, relocate from Boston to rural Maine when he's appointed director of the University of Maine's campus health service.

They quickly make friends with their new neighbor, the elderly Jud Crandall (John Lithgow), who becomes like a father figure for Louis. During a walk in the woods near their new home, the Creeds come across the town's pet burial ground, which has a misspelled sign that reads "Pet Sematary." When their cat dies, Louis plans to bury him in the cemetery, but Jud shows him a Native American burial ground that's believed to bring pets buried there back to life.

Skeptical about what Jud has told him, Louis buries the cat there, but it sets off a perilous chain reaction that unleashes an unfathomable evil with horrific consequences.

Based on the supernatural horror novel Pet Sematary by Stephen King.