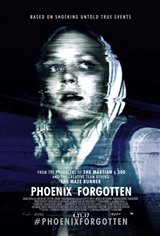 When seven mysterious lights appear in the sky on March 13 1997, several residents of Phoenix, Arizona claimed to have witnessed them. This phenomenon, which becomes the most famous UFO sighing in American history, is referred to as "The Phoenix Lights." Two months later, three 17-year-old high school students — Ashley Foster (Chelsea Lopez), Josh Bishop (Luke Spencer Roberts) and Mark Abrams (Justin Matthews) — set out on a camping trip in the desert outside Phoenix to making a documentary about the Phoenix Lights, but were never seen again.

Fast forward 20 years later. Sarah Bishop (Florence Hartigan), a documentary filmmaker and younger sister of one of missing teens, returns to Phoenix to investigate their disappearances and to interview their family and friends. When she discovers a tape from the night her brother and his friends disappeared, what she views on the tape is horrifying.