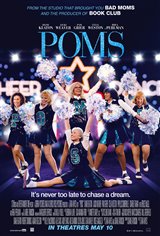 Martha (Diane Keaton), who has terminal cancer, decides not to undergo chemo or radiation. Instead, she moves to a retirement community to live out her last days. Reluctant to make friends at first, her next door neighbor, Sheryl (Jacki Weaver), eventually rubs off on her. As Martha remembers how she was chosen to be a cheerleader in her senior year of high school, only to have to bow out to take care of her mother, it stirs up memories.

She and Sheryl decide to start a senior cheer club and recruit a group of other senior women in order to enter a competition within the retirement community. But when an injury sidelines them, they enter a bigger competition for cheerleaders 18 and over. Finding that the other seniors in the competition are high school seniors, it forces the retirees to give it their all.