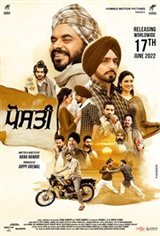 Stray, poor, idle, addicted common people can be found easily around us. The politicians and system treat them as puppets. Such people are not considered as human beings. Most of their questions can't be solved but they themselves are a big question for society. These "unimportant" people either get trapped or become revolutionary for the society.

Revolutionary people serve as the flag of humanity, the colors of which cause irritation in other's eyes. Posti is the story of the irritation caused by these revolutionary colors. Why it happened in the past, happening now and how long will it continue?