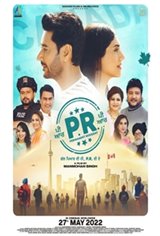 As with all their previous films, Harbhajan Mann & Manmohan Singh showcase in "PR" a story that is entertaining, relatable, and riveting, which is meant to be enjoyed by complete family audiences worldwide.

Shot across breathtaking locations across Canada & India, the film features a narrative of a man who embarks on a journey to solve the mystery and find out what happened to his significant other; a young girl, who like hundreds of thousands of Punjabi Indians, immigrated to a foreign country to obtain a PR status but has since disappeared and cut off contact with her loved ones.

Concerned and tracing her whereabouts, he reaches Canada to uncover the truth. The experiences, people, and circumstances he finds himself in forms the complete storyline.

The very contentious and trending issue of young students who have went to Canada for PR, and their mistreatment and struggles over there at the hands of their own countrymen, is also addressed in a very truthful and unique manner.

The entire storyline and screenplay ultimately features a wide and cohesive range of romance, comedy, and drama right until its final second.