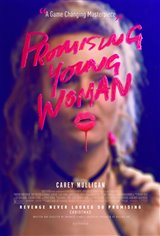 Once a promising young medical student, Cassandra's (Carey Mulligan) career was derailed when her best friend was raped. When everyone but Cassandra blamed her friend for what happened, the friend went on to commit suicide. Despondent, Cassandra drops out of school and takes a low paying job as a barista.

She begins living a secret life at night by going to bars and pretending to be drunk. Then when a man tries to take advantage of her, she confronts him, totally sober, with the fact that what he's doing is wrong. When she discovers that her friend's rapist has become a doctor with a wonderful life who's about to marry a model, she decides she has to do something to avenge her friend.