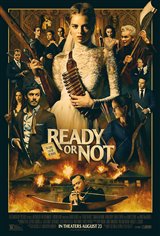 Grace (Samara Weaving), a young woman who was raised in the foster system because she has no real family of her own, feels incredibly lucky when she meets Alex Le Domas (Mark O'Brien), a handsome and eligible bachelor to whom she becomes engaged.

However, she doesn't realize that new brides have to go through a macabre postnuptial initiation as part of a time-honored tradition within his wealthy, eccentric family, who live in a mansion and dress like the Addams Family.

The initiation consists of a game that takes place after midnight. Alex's family, including hgis father Tony (Henry Czerny), his mother Becky (Andie McDowell) and his brother Daniel (Adam Brody), have Grace draw a card. She randomly picks one, which says "Hide and Seek." Tony explains to Grace that she has to hide and if she wants to win, she must stay hidden until dawn.

Meanwhile, the family, armed with a variety of weapons they're unfamiliar with, hunt Grace down.