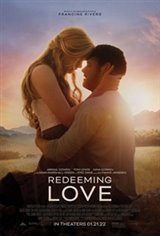 In California in the 1850s, Angel (Abigail Cowen) works as a prostitute, having been sold into the business as a child after her mother (Nina Dobrev) died. She hates the men who have used her, and she suffers from self-loathing, not knowing how to get out of her situation.

When she meets a good man named Michael Hosea (Tom Lewis), she discovers that not all men are the same, and that she may have a future. However, she begins to doubt that she is worthy of his love.

Based on the novel Redeeming Love by Francine Rivers.