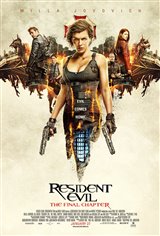 She must now travel back to what used to be The Hive in Raccoon City, the site where the nightmare began and where the Umbrella Corporation is preparing a final strike to eliminate all remaining survivors of the apocalypse. In a final stand, Alice must join forces with an unlikely ally to save humanity and defeat the hordes of the undead once and for all.