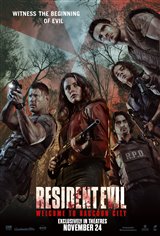 Rediscovering the origin of evil, Resident Evil: Welcome to Raccoon City takes us back to the city that started the zombie outbreak. Claire Redfield (Kaya Scodelario) returns to Raccoon City to ask her brother Chris (Robbie Amell) to help her expose the dark secrets hidden by a massive pharmaceutical company known as Umbrella Corporation.

After having a Chernobyl level incident, Umbrella quickly departed from Raccoon City, leaving the city and its residents to survive against the evil their experiments on humans have created. Chris and Claire form a group with other survivors, as they do their best to make it through the night while uncovering the truth.