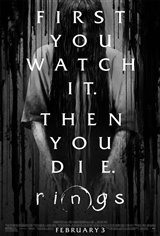 The third installment of The Ring series, this film acts as the prequel. It takes place before the creation of the unmarked tape that terrorizes whoever watches it, and focuses on high school student Julia (Matilda Lutz), and her college boyfriend, Holt (Alex Roe).

The couple has grown distant lately, and fearing that they are drifting apart, Julia travels to see Holt. When she arrives, she finds out he is a part of a club of college students who pass the scorned spirit Samara's cursed tape between each other. Julia discovers that Holt had watched the tape six and a half days ago, and now they must find a way to save him by the end of the day.

Based on the novel by Kôji Suzuki.