Road to the Lemon Grove 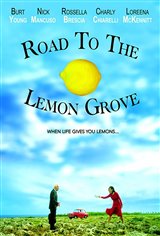 Antonio (Charly Chiarelli), an old-word Sicilian father who has passed away, wants to get into heaven, but first he's given an assignment before they'll let him through the pearly gates.

He visits his son Calogero (Charly Chiarelli), a Canadian university professor who is the sole heir of Antonio's estate, which includes a lemon grove in Italy. Antonio asks Calogero to spread his ashes in the lemon groves of Sicily, while at the same time, reunite two families who are feuding.

However, that may prove to be difficult, as the other members of the family, led by the scheming Vincenzo (Burt Young), aren't thrilled that Calogero stands to inherit the grove. They want to raze the property so they can build an amusement park and resort.