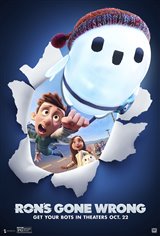 Barney (voice of Jack Dylan Grazer), a socially awkward middle-schooler, finally convinces his father to get him a BBot, to be his "Best Friend Out of the Box." When the BBot arrives, his name is Ron (Zach Galianakis), but it turns out that Ron is a defective model missing some coding and is a rogue unit that the company is after.

Ron and Barney soon find themselves on the run in order to stop the company from reclaiming and destroying Ron. During their journey, the two misfits wind up developing the kind of friendship that BBots are meant to help form with their human counterparts, showing it's okay to be a little odd.