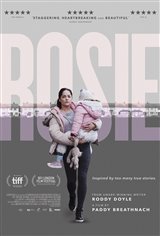 Set in Dublin over an intense 36-hour period, Rosie Davis (Sarah Greene) and her partner John Paul (Moe Dunford) strive to find somewhere to stay with their four young children, ranging in age from four to 13, after their landlord sells their rented home.

When the three eldest children go to school and John Paul goes to work as a dishwasher in a restaurant, Rosie spends her day calling around to see if she can find anything, even a room for one night. When her efforts prove fruitless, they begin living out of their car, to the confusion of her younger children, who don't understand why they can't just go home to their house.

To top it off, teenager Kayleigh (Ellie O'Halloran) is angry about the situation and goes missing, while eight-year-old Millie (Ruby Dunne) is being bullied at school. Although Rosie has a mother who could take them in, she's too angry at Rosie to help, because her daughter accused her late husband of abuse some years earlier. When social services gets wind of the situation, it all becomes almost too much to bear for Rosie.