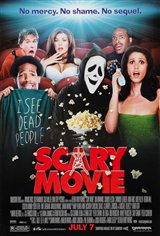 This is a thriller-comedy that is guaranteed to shock. In this raucous spoof of recent teen horror films, not even The Blair Witch Project, The Sixth Sense, The Matrix or even the "What's Up" Bud commercials have been spared.

As you'd expect, after the murder of a beautiful classmate, a group of misguided teens discover there is a killer among them. Cindy Campbell and her clueless friends (all actors between the ages of 20 and 30, of course); Buffy, Brenda, Bobby, Greg, Shorty and Ray, must protect themselves from danger.