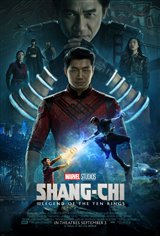 Going by the name Shaun, Shang-Chi (Simu Liu) is living a quiet life as a parking valet in San Francisco, along with his best friend and co-worker Katy (Awkwafina), who is equally happy with her job. However, when they're confronted by mysterious assassins who are after the necklace Shang-Chi's mother gave him when he was a child, they're both thrust into Shang-Chi's family's matters and the life he thought he'd left behind.

Believing his sister Xialing (Meng'er Zhang) is in danger as well, Shang-Chi and Katy go on a mission to find her. Reunited, they go to see their father, Wenwu (Tony Leung), who neglected them for most of their lives. They discover he's having visions that are urging him to make a decision that will destroy their mother's homeland. The siblings, along with Katy, vow to stop him.

Simu Liu was raised in Mississauga, Ontario and starred on the hit Canadian comedy series Kim's Convenience for all five seasons.