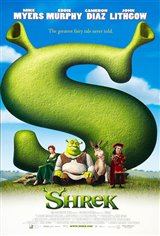 In this computer-animated tale, Shrek (Mike Myers) is a big green ogre whose swamp has been invaded by numerous, annoying fairy tale characters. To get rid of them, he makes a deal with the tyrannical Lord Farquaad (Lithgow), the ruler of Duloc, who had banished the creatures from his wannabe kingdom.

Shrek agrees to rescue Princess Fiona (Cameron Diaz), Farquaad's intended bride, from a fire-breathing dragon and take her to Farquaad.