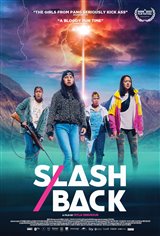 When Maika (Tasiana Shirley) and her Inuit friends discover an alien invasion in their tiny Nunavut hometown, it's up to them to save the day.

Utilizing their makeshift weapons and horror movie knowledge, the aliens soon discover that you don't mess with girls from Pang.

This Canadian production was filmed in Pangnirtung, Nunavut, with a Canadian cast and crew.