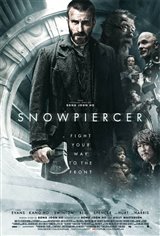 When an experiment to counteract global warming causes an ice age that kills nearly all life on Earth, the only survivors are people travelling on a massive train called Snowpiercer. Powered by a perpetual-motion engine, it travels on a track that spans the globe.

The inhabitants of the train soon find a class system installed, with the wealthy taking over the front of the train and the starving poor forced to live behind locked doors at the tail, where food is sometimes delivered to them in protein blocks by armed guards. The guards also periodically take some of their children.

One of the leaders of the tail inhabitants, Curtis (Chris Evans), stages a revolt to unlock the doors dividing each car so they can get to where the elite live in luxury and take over.

Based on the French graphic novel Le Transperceneige by Jacques Lob, Benjamin Legrand and Jean-Marc Rochette.