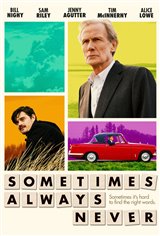 After Merseyside tailor Alan's (Bill Nighy) eldest son Michael stormed out of the house after a particularly heated round of Scrabble, never to return, Alan has become obsessed with the game. He's become convinced that Michael is not only alive, but staying connected with him through internet Scrabble.

Alan's youngest son, Peter (Sam Riley), who lives nearby with a wife and son, has been generally ignored and looked over since Michael disappeared. However, he agrees to help Alan search for him, as they pass out flyers on their journey while trying to repair their own strained relationship.