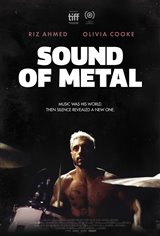 During the middle of a concert tour, traveling punk-metal drummer Ruben (Riz Ahmed) is alarmed when he begins to experience intermittent hearing loss. He finds a doctor who specializes in hearing, but the doctor tells him his hearing is deteriorating rapidly and will continue to get worse. The only thing he can do is quit drumming in an effort to slow down the hearing loss.

Distraught that his music career could be over, he continues to play, until the day he goes completely deaf. His bandmate and girlfriend Lou (Olivia Cooke) checks Ruben, who's also a recovering heroin addict, into a secluded sober house for the deaf in an effort to help him learn to adapt to his new situation. But trying to accepting his new reality makes Ruben feel as if his life is over.