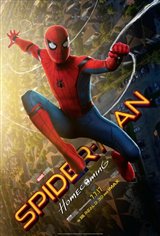 Peter Parker (Tom Holland), 15, is a high school student who lives with his Aunt May (Marisa Tomei) in a high-rise in Queens. Having already had an adventure with The Avengers, he's waiting for Tony Stark (Robert Downey Jr.) to give him an assignment. In the meantime, he practices his skills, helping out locals in trouble.

After a few missteps, Stark advises Peter to stop trying to do things on his own. However, when Peter encounters the ruthless Adrian Toomes, a.k.a. The Vulture (Michael Keaton), the villain threatens Peter, telling the teen that if he interferes with him, he will kill Peter and everyone he loves. With or without Iron Man's guidance, Peter discovers he has to be more than just what the Spidey suit can do for him in order to fight to protect his loved ones.