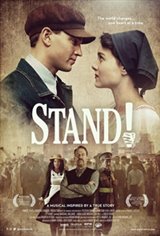 Winnipeg, 1919. Stefan and his father Mike fled Ukraine for Canada, hoping to earn enough money to bring Stefan’s mother and siblings over as well, and reunite their family. Stefan falls for their Jewish suffragette neighbor, Rebecca, but her family is dead-set against these two having a relationship. Meanwhile, when soldiers return from WWI, they’re angry at the lack of jobs. They blame the situation on the city’s immigrants, which revives racial tensions in their community.