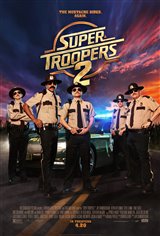 When the United States and Canada get into a dispute about the location of the actual border in regards to the Quebec town of St. Georges du Laurent, the Super Troopers — Mac (Steve Lemme), Thorny (Jay Chandrasekhar), Foster (Paul Soter) and Farva (Kevin Heffernan) — are called in to set up a new Highway Patrol station in the contested area.