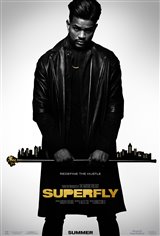 A remake of the 1972 blaxploitation film Superfly, in which an African-American man finds that leaving behind his life of crime is more difficult than he'd imagined.

Street-level hustler and cocaine user Youngblood Priest (Trevor Jackson) has been working the streets since the age of eleven. His strength lies in knowing his knowing his rivals' secrets. is looking for one last score so he can leave the underworld behind for good. Along with his right-hand man Eddie (Jason Mitchell), he goes behind the back of his trusted supplier, Scatter (Michael Kenneth Williams), by teaming up with the head (Esai Morales) of a dangerous Mexican drug cartel.

Priest risks losing everything in an effort to leave the game so he can live the good life in Montenegro with his two girlfriends, Georgia (Lex Scott Davis) and Cynthia (Andrea Londo).