Teen Titans GO! to the Movies 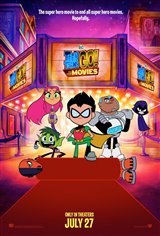 The Teen Titans take notice of the fact that all the major superheroes out there are starring in their own movies, that is, with the exception of the Teen Titans. Their leader Robin decides to turn their dream into a reality. All he has to do is get the hottest director in Hollywood to take a look at them.