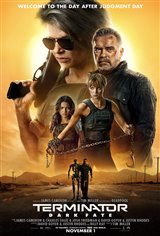 Grace (Mackenzie Davis), an augmented human super soldier, time travels to Mexico to save Dani and is joined by a battle-hardened Sarah Connor. The three women are led to a T-800 (Arnold Schwarzenegger) from Sarah's past. His involvement may prove to be their best hope to save not only themselves, but the future.