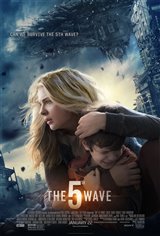 After four waves of deadly attacks by extraterrestrials known as "The Others" devastate most of Earth, Cassie (Chloë Grace Moretz), 16, goes on the run to find her younger brother and prepare for the fifth and final wave, in which there is little hope of survival.

During her quest, she is shot in the leg by an unknown assailant and passes out. A young man named Evan Walker (Alex Roe) saves her and takes her to his farmhouse. He tells her he's an "Other" who has been on Earth for several years as a sleeper agent. Although he says he disagrees with the invasion, she's not sure she can trust him.