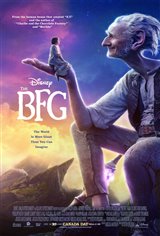 A little girl named Sophie (Ruby Barnhill) who lives in an orphanage, is drawn to the window one night, where she witnesses a massive, frightening creature outside. She runs away from the window and hides under her covers, but is plucked from her bed by a monstrously huge hand.

This starts her on her journey with The Big Friendly Giant (Mark Rylance), who is an outcast because he refuses to eat boys and girls, and the Queen of England (Penelope Wilton). They try to capture the giants who have been eating people and terrorizing the human world to stop them before they hurt anyone else.

Based on the children's novel by Roald Dahl.