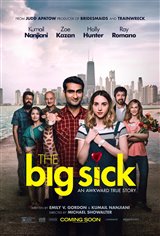 Pakistan-born comedian Kumail Nanjiani knows his traditional Muslim family would be unhappy with his relationship with his American girlfriend, Emily (Zoe Kazan) — if they knew. Emily finds out that Kumail hasn't told his parents about her and that if he does, they'll disown him. Their relationship falters.

When Emily is admitted to the hospital for a mysterious infection that is so serious the doctors want to induce a coma, Kumail immediately calls her parents — Beth (Holly Hunter) and Terry (Ray Romano). Although they're chilly at first and try to get rid of him, Kumail stays by Emily's bedside, especially as they learn more about Emily's frightening condition.